Hitchhikers started as an idea; asking ourselves if it were possible to join future journeys to Mars. It's an exploration to look where the possibilities lie, it will not happen for an untrained tourist. But the possibilities are in the small hitchhiking rovers that may prove to be a solution.

This little Mars surrogate may become one of the cheap alternative to a form of space tourism. I think we'll go to mars as an private rover that we can control from our lazy couch if you’re not an astronaut. 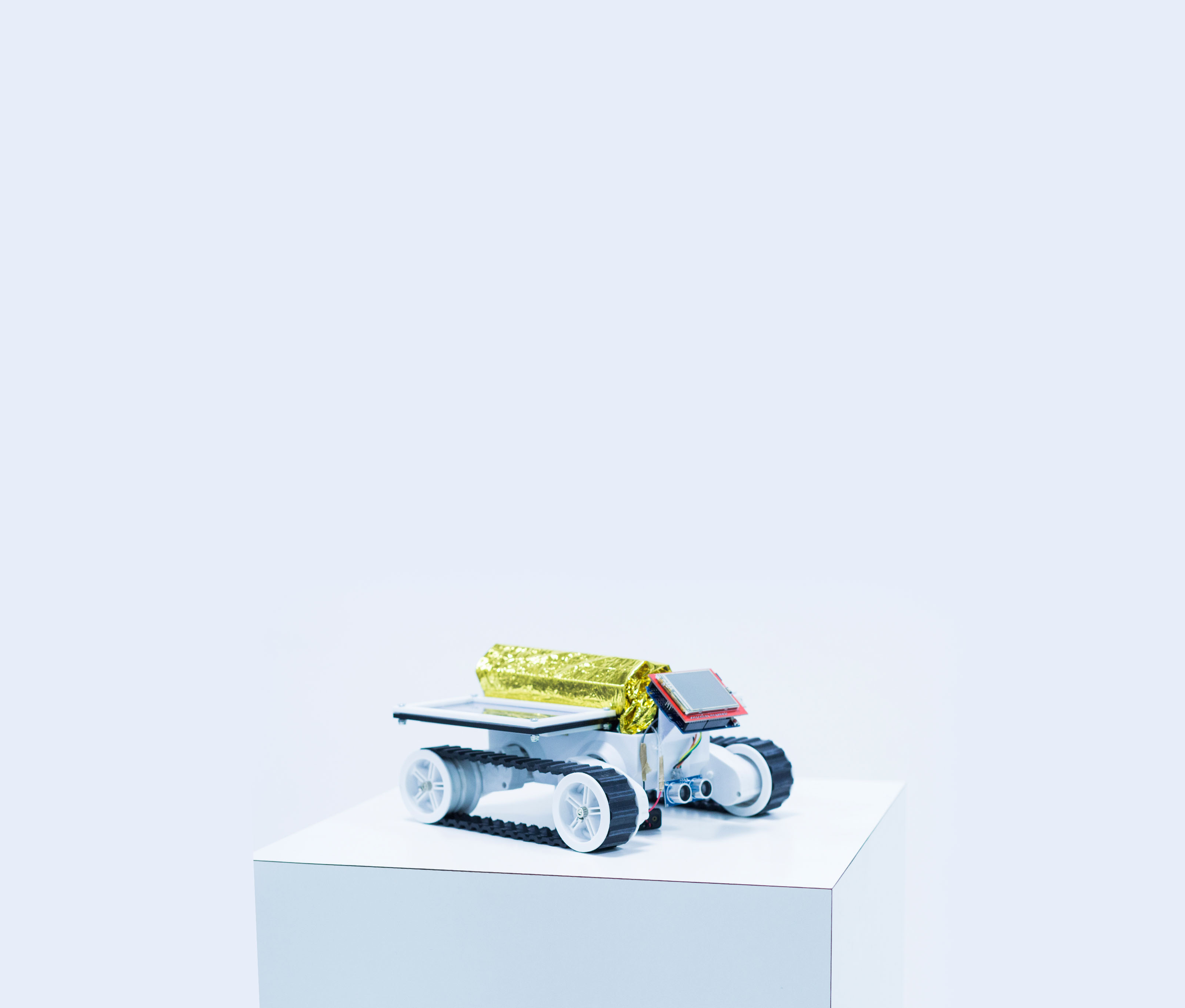 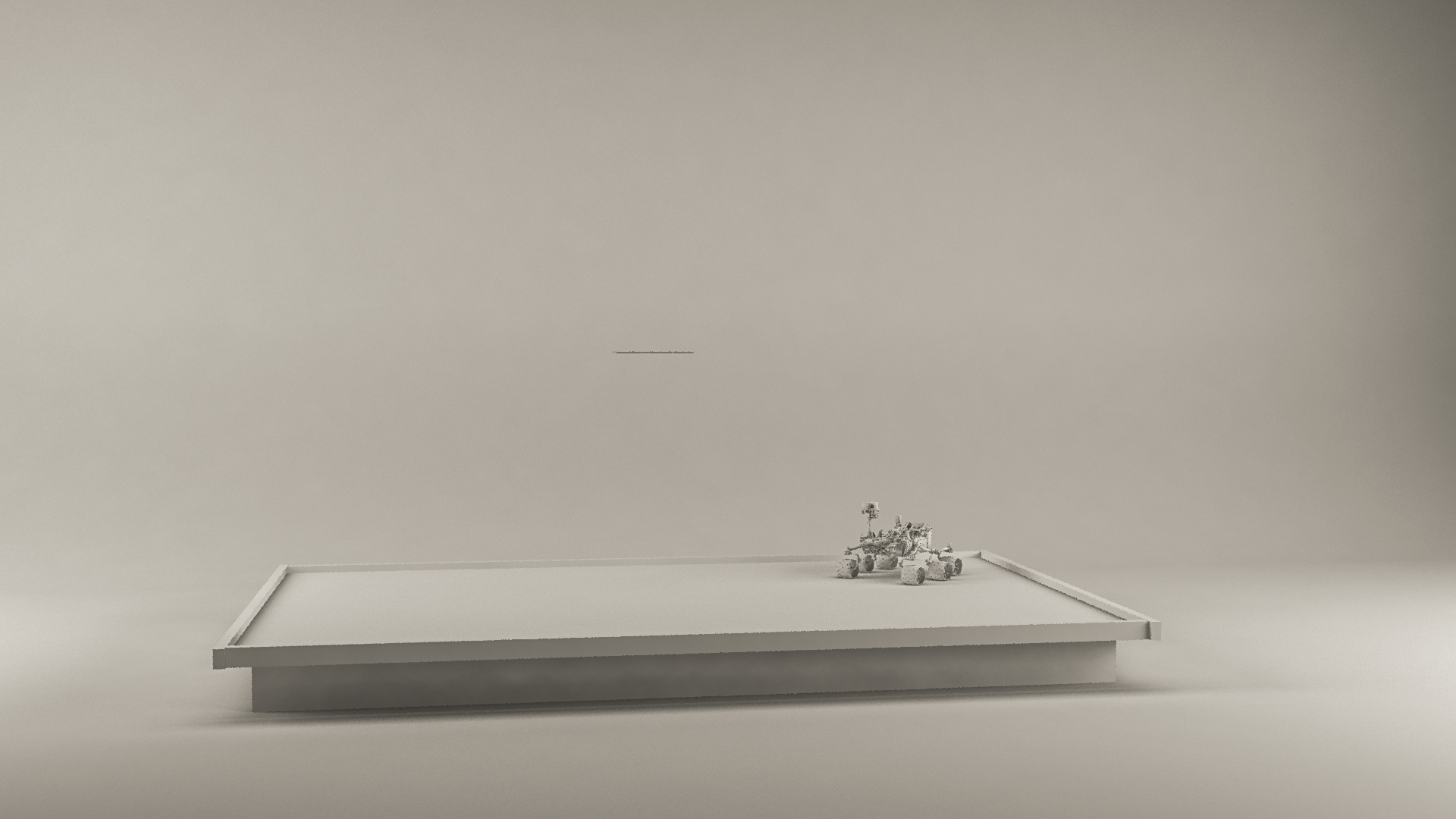 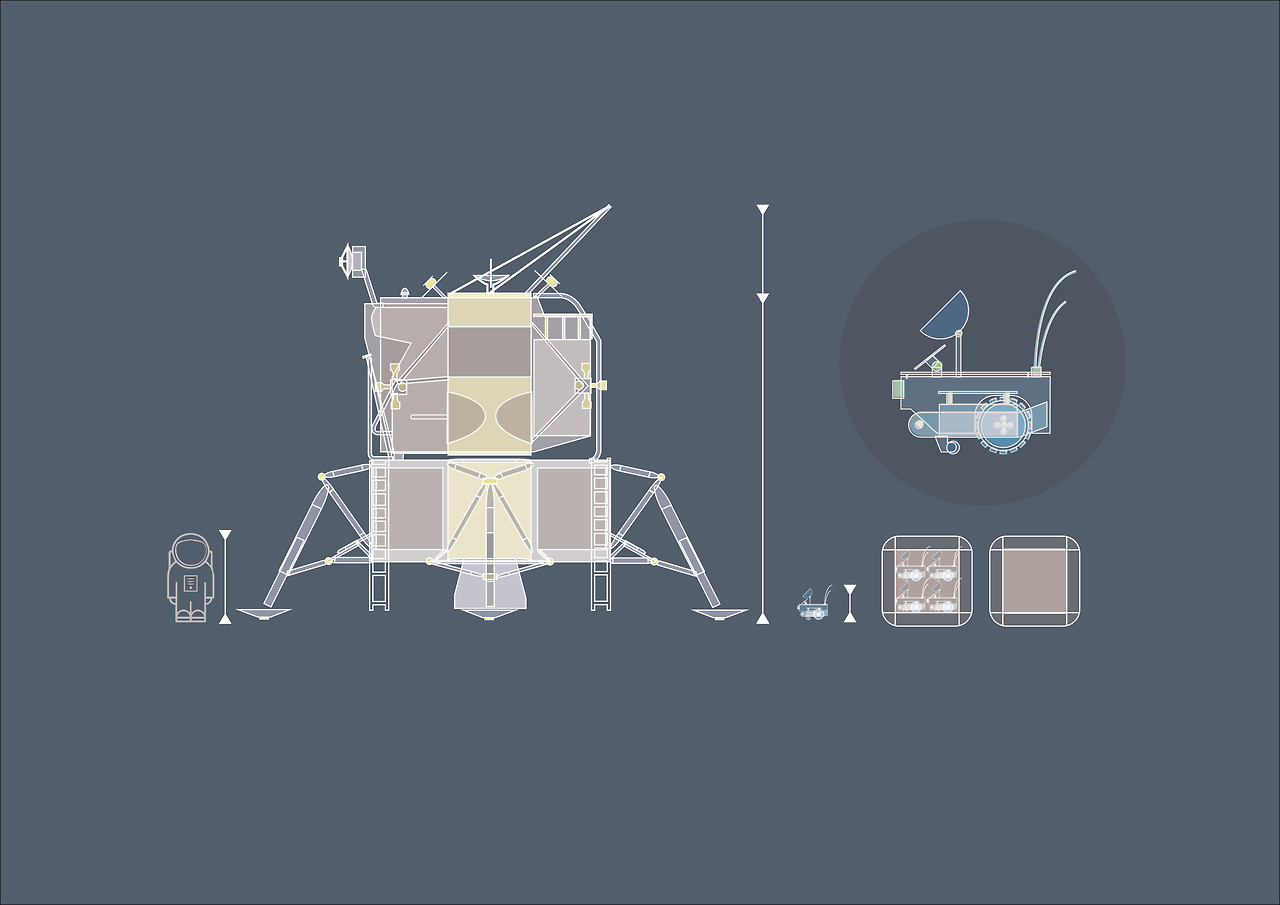 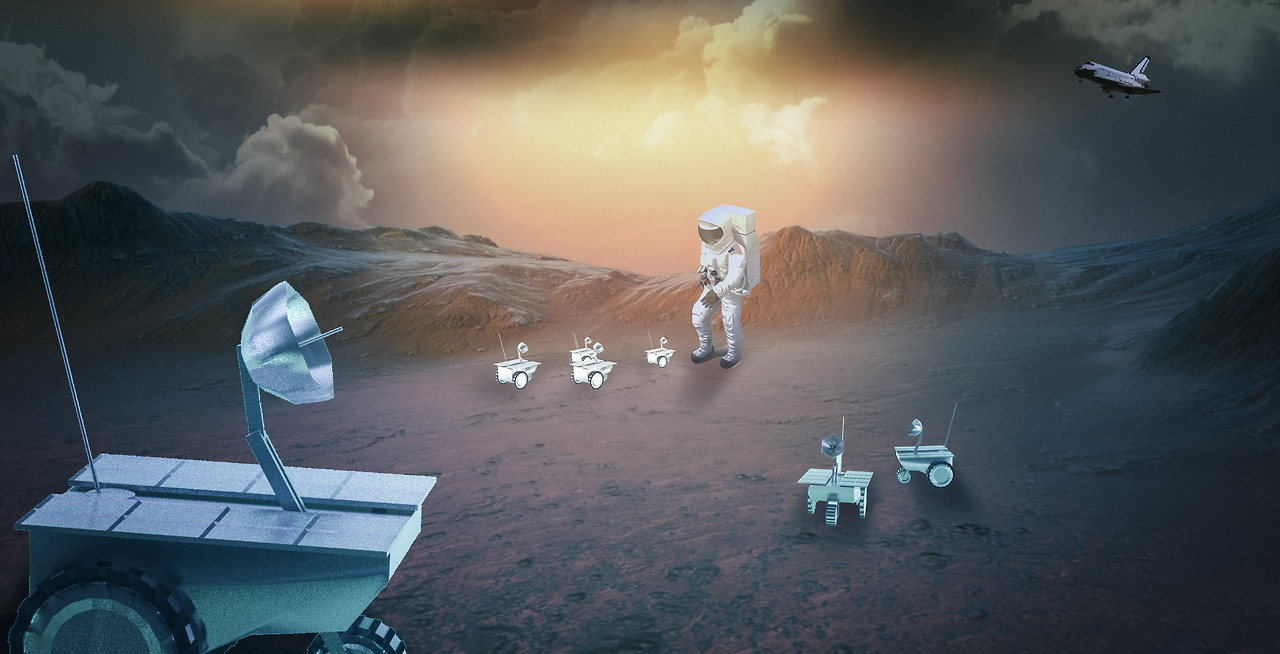 When it comes to talking about space, I am a bit of a nerd. Using my (sci-fi) knowledge and imagination, I like to think about the first instances of arrival on planet Mars, that has been planned in the near future. The subject of mars and its colonization enjoys a lot of attention nowadays, yet it seems that many physical and social aspects that change on the arrival on such a planet are often only lightly discussed. With this presentation I intend to show several future scenarios, visually translated into a set of playful objects and spaces that should get you more acquainted with the strange nature of planet Mars.

We tend to overlook the temperature of Mars. It might look like a warm planet, but since its farther from earth and has a thinner protective layer then earth, making it hard for heat to be trapped; my guess is that when you come in touch with mars you’ll experience coldness. That coldness can be felt in the close proximity of the installation.

After floating in space for a long time and especially not being subject to gravity for a while will result into a form of bone weakness. This part of the installation lets you experience a brief moment of a very common type of bone weakness among astronauts. This type of bone weakness manifests itself as an uncontrollable weakness of grip and a strange form (niet: feeling) of tightness.

The last part of the installation is more of a visual narration on the dependence of oxygen. Refilling of portable oxygen tanks will be a necessity, which is practically inexistent here on earth. It won’t be as obvious as walking outside and taking a breath; The oxygen which once surrounded us everywhere will be confined into a small backpack. 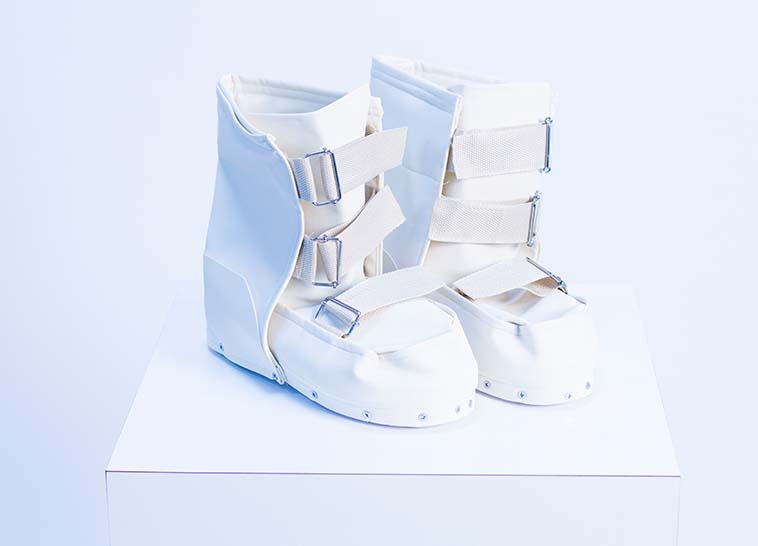 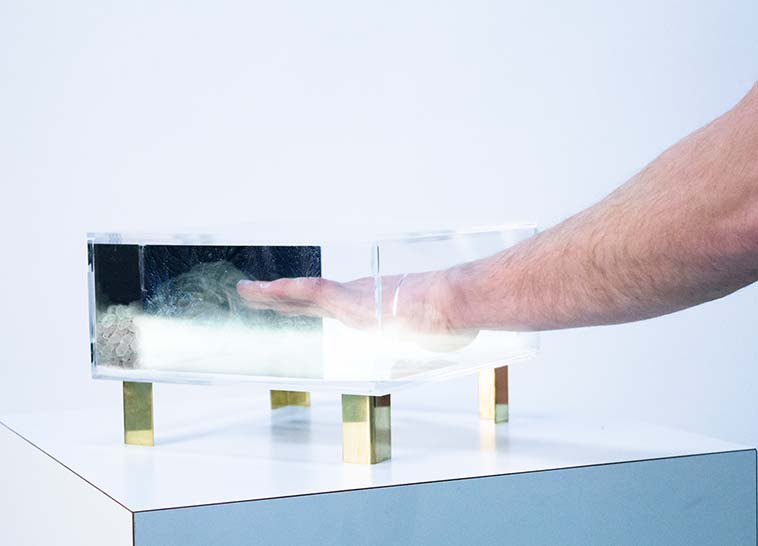 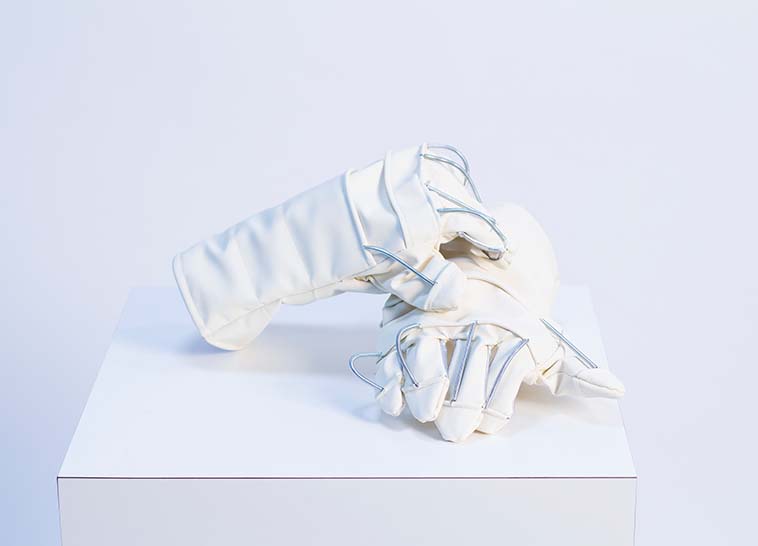 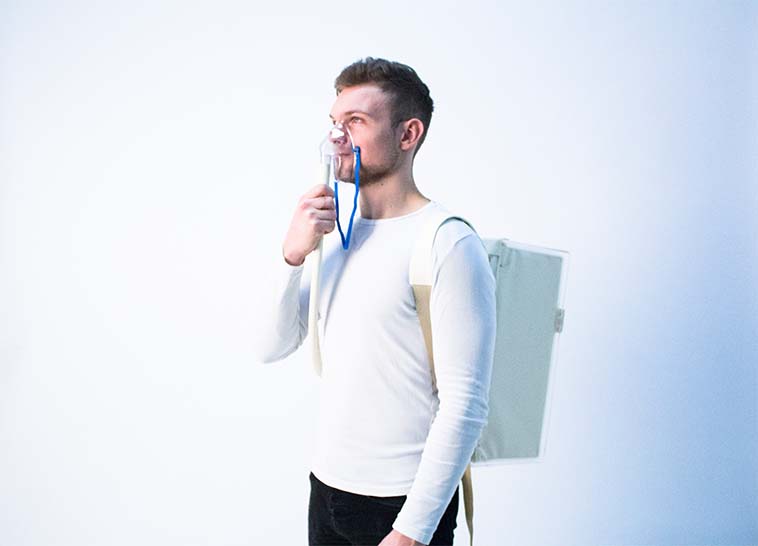 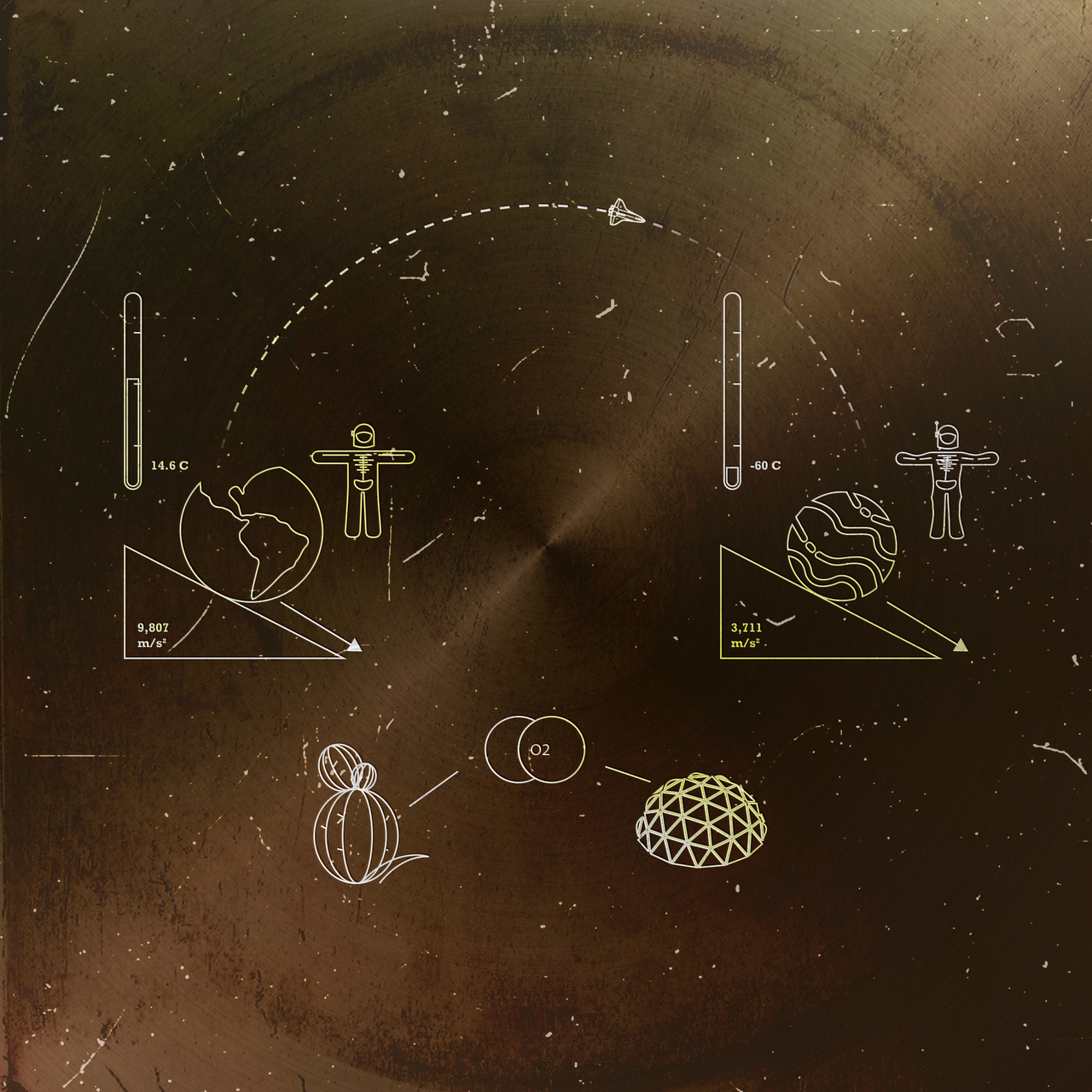 The fiction writer J.G. Ballard is rising back in to popularity with a film adaptation of his book High-rise. The book was written in the early 80's with some ideas and speculation of the scenarios of high rise living, with Ballards birds eye view approach the human psyche is mostly reviewed from a very interesting angle captured within it's space.

Some of the most interesting rooms in the book are hidden by words and our own imagination. Out of pure interest and fascination I started translating this book visually in photography and a phantasmagorian model, so that we could take our time marble at the authentic ideas that we had in the early 80's of high-rise living. 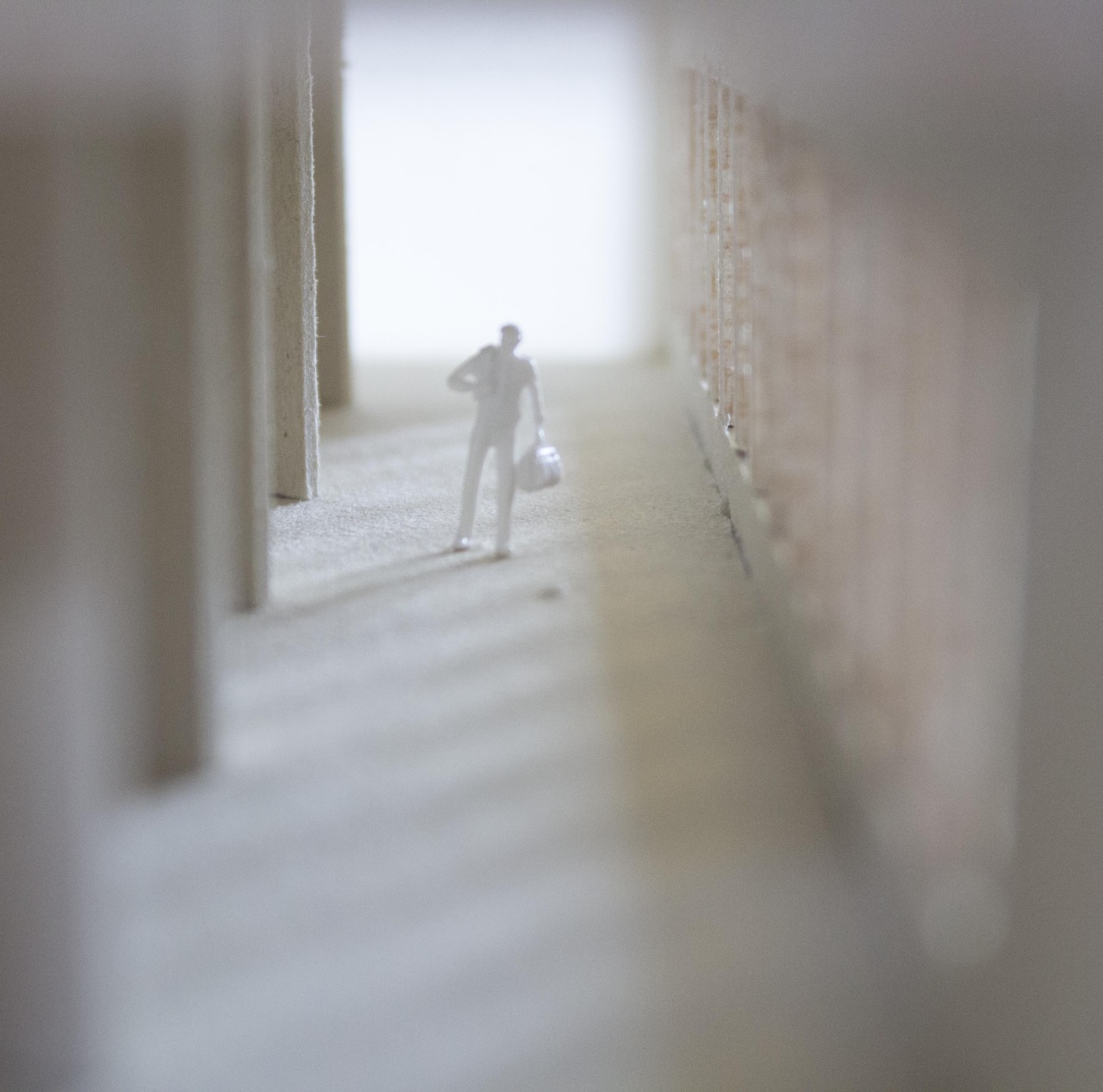 Immigration is a very common situation in the western world, we've been protesting about this subject and  a lot of debate. We see them as more of a common nuisance then individuals according to some locals that I've interviewed. So thats why I started my own immigration project.

This installation is all about relating towards immigrating individuals. It was also a chance to relate it to my own background, since my family is from Chinese descent.

The story behind this work dates back at the start of the Second World War; "The raping of Nanking". This war was extremely macabre but slowly fading away in history.

"I could remember when I was a young child, our windows were covered with newspapers. You could barely look outside, I use to peel a small whole on the covered windows so I could look outside."

This small text that I got during long conversation, I translated this story into an installation.

The work was build on two different locations on the same time, one on a very grim location and the other on a safe and beautiful lofty place. Like the story, the windows are covered. this symbiotic installation emulation brings you into a dark and grim place, it also comes with peeled whole in the window referred from one of the survivors story. Eventually the space you arrive in becomes an obscura, a big box where you can project the outside world on the inside. 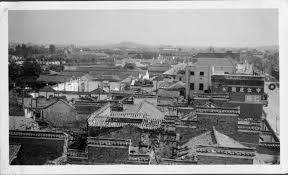 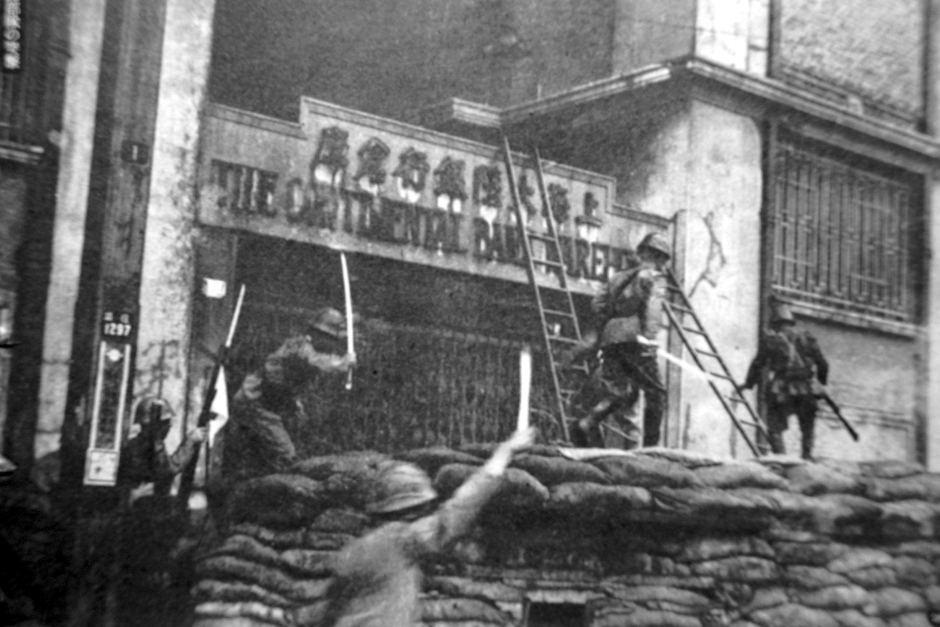 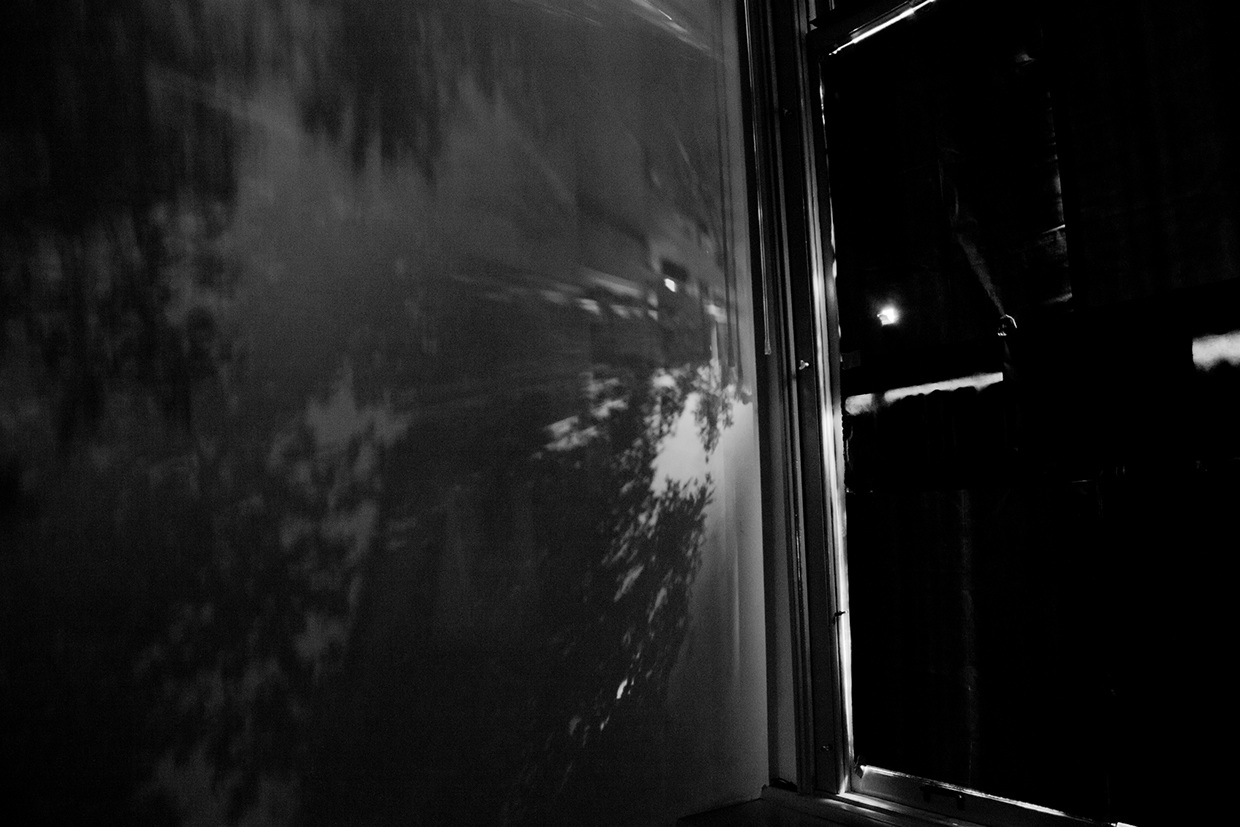 Animals or creatures, are they extinct or a species yet to be discovered. They can be bigger than a whale or smaller then the eye can see, we know how they look like purely by observation with the tools of speculation.

I see them as the so called "non-existing creatures" that have no body but only function, like viruses and diseases.

I'm talking about computer viruses, in this project I've been studying a small collection of computer viruses, Specialists tend to describe their functionalities with organic properties. But nobody could tell each other how they could look like.

Can we put these computer viruses on display as we do with most other creatures? Could there be a benefit to give these man-made beings a body? It may help us understand it from a very different perspective or it can create interest from unexpected corners. 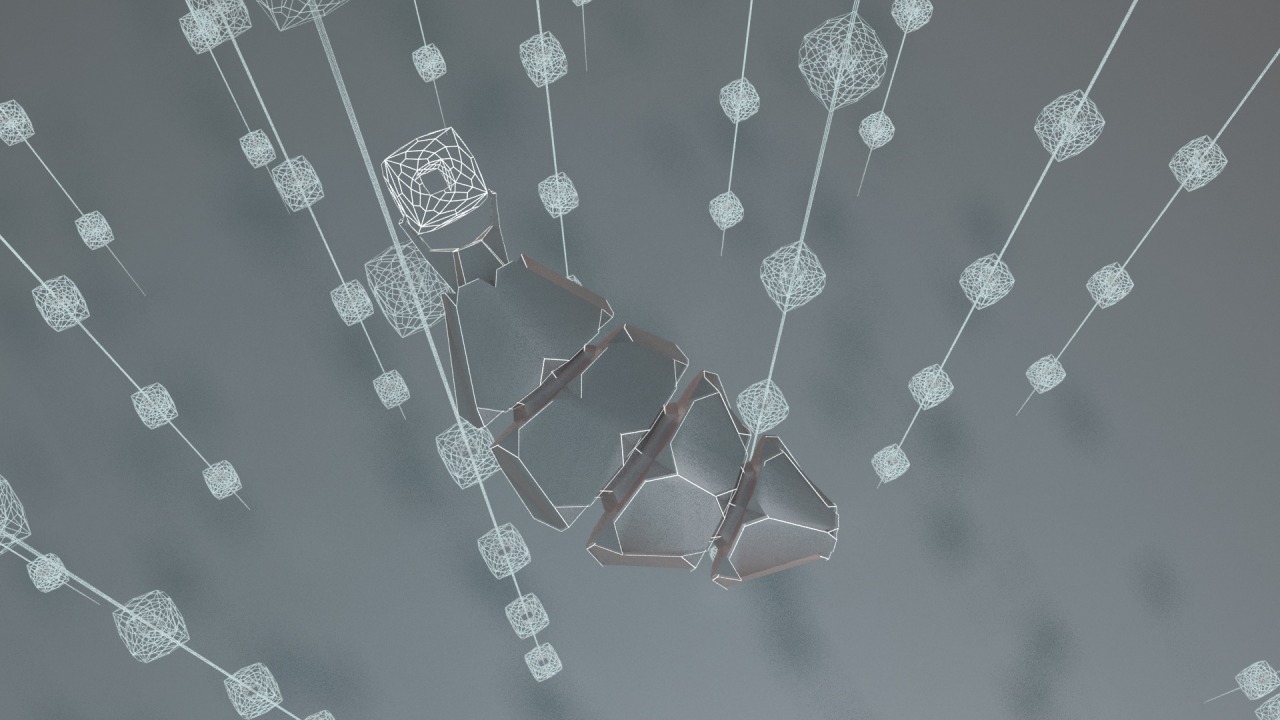 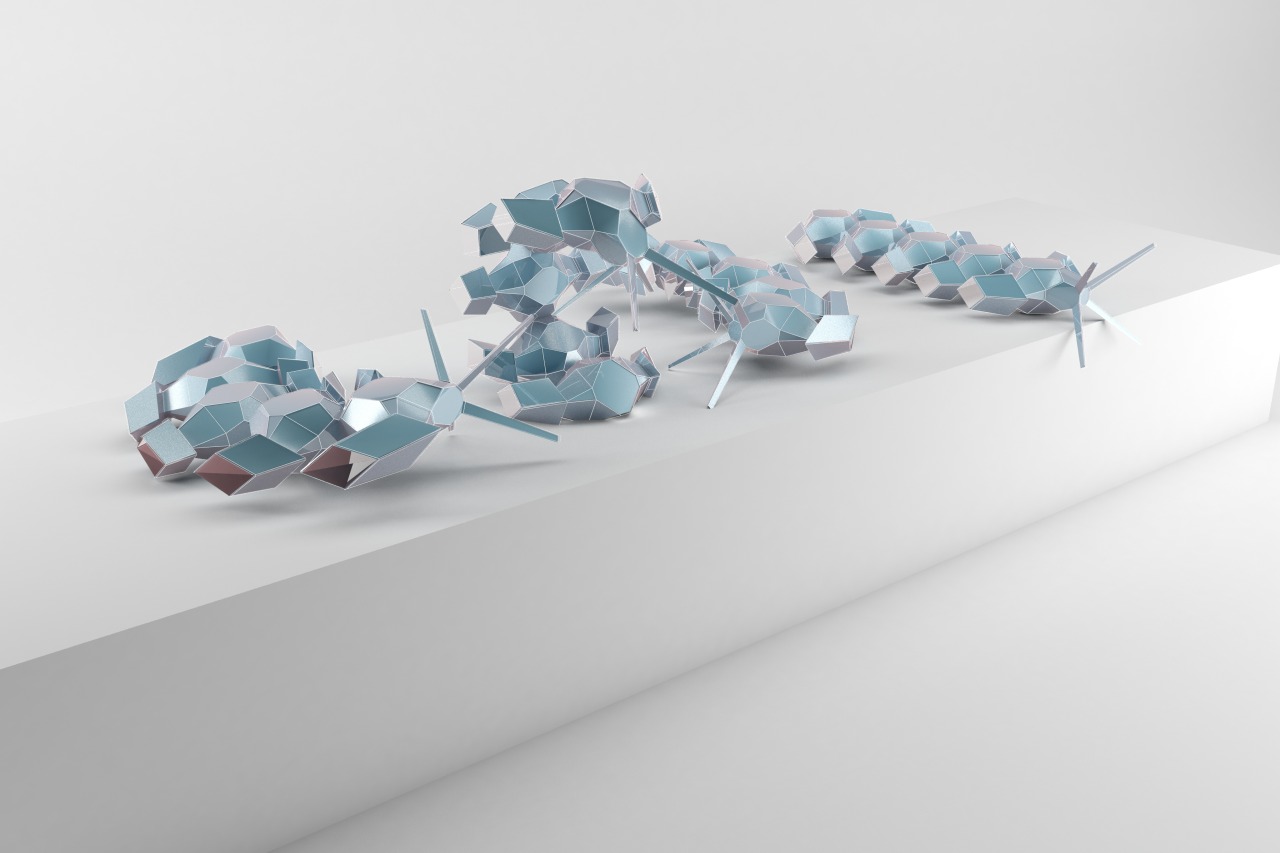 A subculture in China that got my attention during my journey through Asia, they call themselves 'Diaosi'. The word itself is more of a swearword than a compliment, but unfortunately the Chinese population has to face the fact that these group of individuals are growing within their society.

This culture started when the internet became more open platform in China, you can say that people are finally discovering the media . Some of them started with playing on the internet when this medium was at its peak, the result was as they say "an addiction".

The government called this addiction a disease, they compared it with drug and alcohol abuse. But this subculture mentioned that it's a part of a lifestyle that is becoming a big part of Chinese society. As a young individual life is getting harder, standards are high and the quality of life is getting worse because of poverty. So these "Diaosi" tend to escape real life in the world of MMO's [massive multiplayer online games], in real life some of these youngsters dropped out of school or can't find a job because of the high standards.

To maintain their life they try to live simple and cheap, that is why most of them live with their parents for a very long time. The parents on the other hand are becoming desperate, seeing their children disappear behind the screen. That is when the internet bootcamp started to appear, not to learn how the internet works, but I'm talking about military camps for youngsters to learn how to stay away of the so called 'disease'.

However, the book that I created emphasizes their lifestyle and who they are as a person, not in a pure negative way but towards a more positive attitude. This subculture is slowly growing around the world.

It's time that we get to know them for who they are. 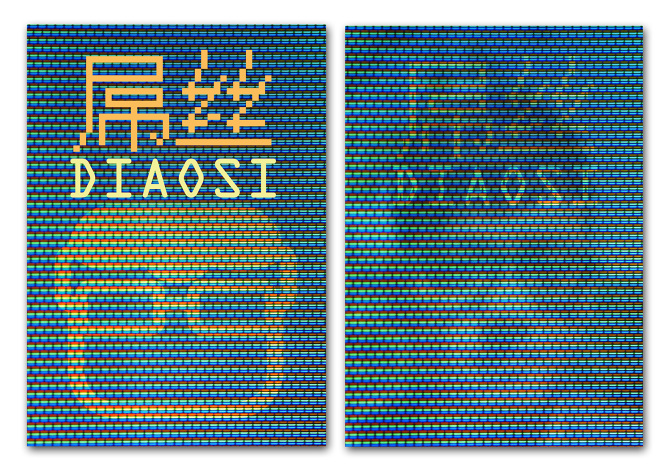 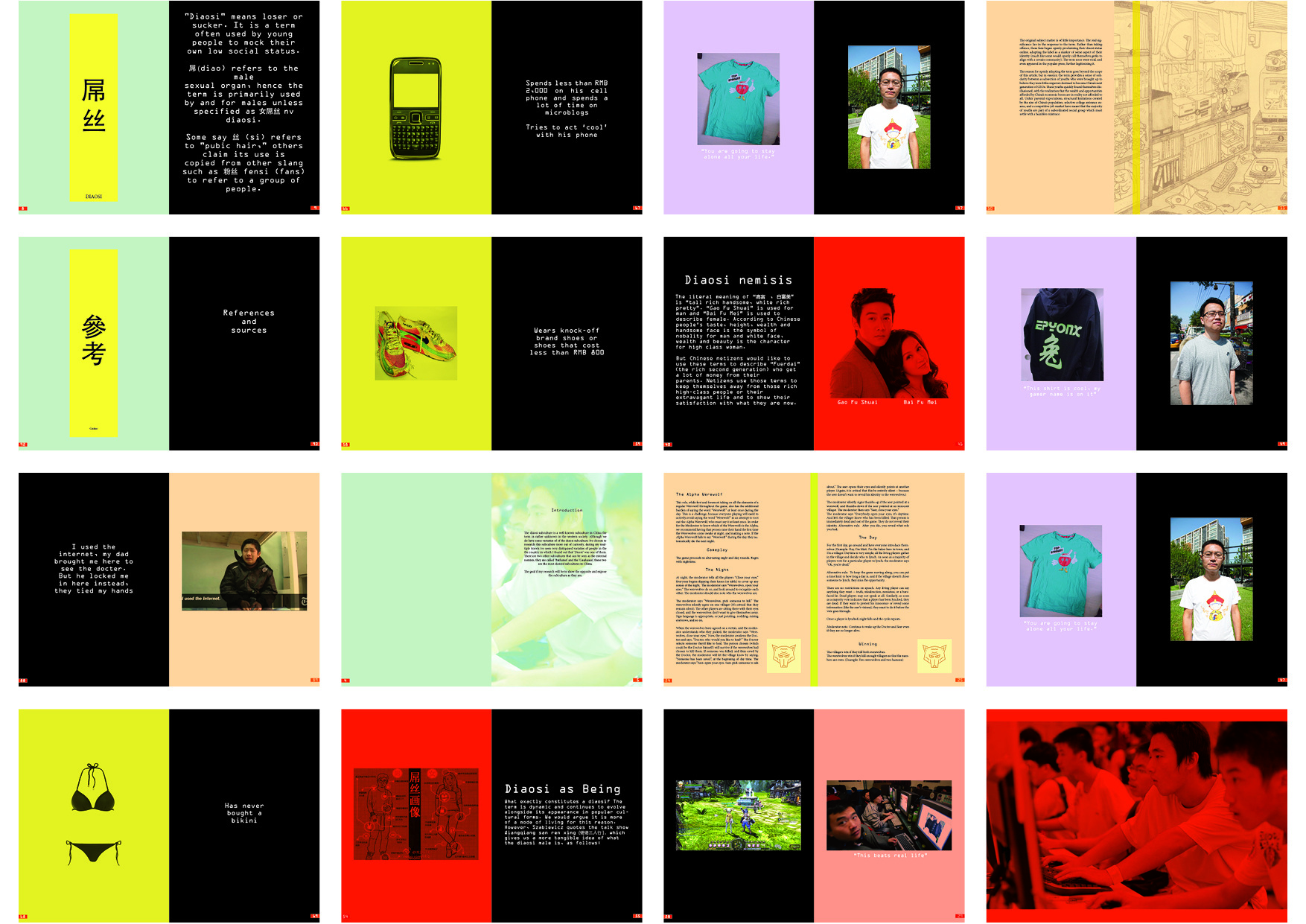